What is Methylglyoxal Miel?

The chemical formula of Methylglyoxal Miel is CH3COCHO. Molecular weight 72.06. Yellow flowing liquid. It has a spicy smell and hygroscopicity. The boiling point is 72°C, the relative density is 1.045524, and the refractive index is 1.400217.5. Soluble in water, soluble in ether and benzene, it is yellow, and soluble in alcohol, it is colorless. It is very easy to polymerize into a viscous semi-solid, dissolve in water, emit heat, and return to a monomer solution. Heated to form a yellow-green gas, which can last for several days in a closed tube. Commodities are generally 20% to 40% aqueous solution. Slightly acidic to litmus paper. Methylglyoxal Miel is a normal metabolite in the human body, which can be produced by the metabolism of carbohydrates, lipids and proteins. Under normal physiological conditions, its synthesis amount in the human body is extremely low, but it will be significantly increased in hyperglycemia such as diabetic patients. Methylglyoxal Miel Miel is a highly active compound and is cytotoxic. As early as 1958, it was found that glyoxal not only has anti-malarial and anti-viral effects but also has anti-tumor effects, and then people demonstrated the anti-tumor effects of Methylglyoxal Miel from in vitro, in vivo experiments and clinical patients.

Methylglyoxal Miel has extremely high activity and can react with and modify biological macromolecules such as proteins and nucleic acids, resulting in changes in cellular functions. Studies have shown that methylglyoxal has a variety of cytotoxic effects, such as inhibiting cell growth, inducing apoptosis, inhibiting enzyme activity, and activating signaling pathways. The content of Methylglyoxal Miel in various types of tumor tissues is lower than that in normal tissues. After interfering with glyoxalase or adding glyoxalase inhibition, significant tumor inhibition can occur, and this inhibition is achieved by increasing methylglyoxalase. Aldehyde concentration achieved. Methylglyoxal Miel can exert anti-tumor effects by inhibiting proliferation, inducing apoptosis, inhibiting tumor metastasis, enhancing the body’s immunity and improving the sensitivity to existing anti-tumor drugs.

In recent years, it has been found that the most important way for Methylglyoxal Miel to exert its anti-tumor effect is by inducing apoptosis. , the morphology of the cells is greatly changed and lysed, the DNA fragments in the cells increase and the apoptotic bodies are formed. The mechanisms by which methylglyoxal induces apoptosis are as follows. 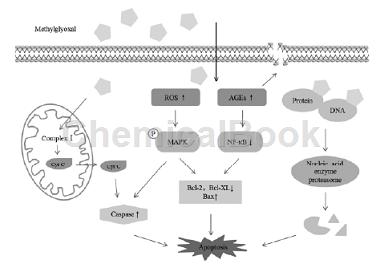 (1) Methylglyoxal Miel can increase the level of intracellular reactive oxygen species (ROS), superoxide anion and hydrogen peroxide generated by methylglyoxal during the glycosylation reaction, and its effect on ROS scavenging enzymes. Inhibition increased the generation of intracellular ROS from two aspects of increasing source and decreasing outgoing route, respectively. Elevated ROS can act as an upstream signaling molecule to activate the mitogen-activated protein kinase p38 (p38MAPK) and p42/44MAPK signaling pathways to mediate apoptosis; at the same time, the production of ROS can also trigger the release of cytochrome c from mitochondria, which in turn activates apoptosis. The proteases caspase-3, caspase-9, and down-regulation of the DNA repair enzyme polyadenosine diphosphate-ribose polymerase (PARP) further damage cells.

(2) Methylglyoxal Miel, as a powerful saccharifying agent, can undergo glycation reaction with other important intracellular components such as proteins to produce advanced glycation end products (AGEs). One of the main products after the amino acid residue, it can activate the nuclear factor NF-κB (nuclearfactor-KappaB) signaling pathway and trigger the mitochondrial apoptosis mechanism. The expression of the anti-apoptotic proteins Bcl-2 (B-celllymphoma-2) and Bcl-XL ultimately leads to increased apoptosis; AP can also promote apoptosis by directly destroying the cytoskeletal proteins actin and tubulin α-tubulin apoptosis.

(3) In the study of sarcoma, it was found that in the process of reducing the activity of mitochondrial complex I, Methylglyoxal Miel can not only greatly reduce the production of ATP, but also reduce the mitochondrial transmembrane potential, thereby changing the mitochondrial membrane permeability. The mitochondrial pro-apoptotic factor cytochrome c is released, ultimately disrupting the integrity of the mitochondrial membrane and leading to cell death. Therefore, methylglyoxal can directly or indirectly activate apoptosis signaling pathway and mitochondrial apoptosis pathway to promote apoptosis. In addition, the MGDN adduct formed by methylglyoxal saccharification of DNA residues can activate endonucleases. After modification of the protein, the biological activity and stability of the protein will be affected to a certain extent, and may even be affected by proteases. These are also one of the reasons why glyoxal promotes apoptosis.

3. Inhibit the ability of invasion and adhesion

The ability of tumor cell adhesion, migration and invasion is an essential key factor for tumor metastasis. Methylglyoxal Miel can inhibit the adhesion and invasion of liver cancer Huh-7 and HepG2 cells. This inhibitory effect is mediated by the tumor suppressor gene p53. When p53 is inhibited or interfered, this inhibitory effect does not exist. Methylglyoxal can promote the translocation of p53 into the nucleus, enhance its transcriptional activity, and restore the Y220C mutant p53 to the conformation and activity of wild-type p53. With the restoration of wild-type p53 function, tumor cells move and invade Inhibited, and the restoration of p53 function has been recommended as a kind of anti-tumor therapy, so methylglyoxal can inhibit the metastasis of liver cancer through the p53 pathway.

Immunomodulation has been considered as another option for the prevention and treatment of tumors. The defense mechanism of the immune system is mainly to activate the body’s immune response through active or passive immunity to remove tumor cells and prevent tumor metastasis and recurrence. Studies have shown that Methylglyoxal Miel can increase the number and phagocytic ability of macrophages and the production and killing of killer T cells in a mouse model of sarcoma 180 cells, enhance the cellular immunity of mice to resist tumors, and some immune regulation in mice. Factors and Surface Receptors: Interferon-γ (IFN-γ), Tumor Necrosis Factor-α (TNF-α), Interleukin-1β (IL-1β), IL-6, Toll-like Receptor-4 (TLR -4) and the expression of TLR-9 also increased significantly. Methylglyoxal mainly promotes the production of macrophages by regulating macrophage colony-stimulating factor, and the p38MAPK and NF-κB signaling pathways are also involved. Therefore, methylglyoxal plays an important role in enhancing the activity of macrophages and lymphocytes and in resisting tumors through immune regulation.

High expression of glyoxalase I can cause multidrug resistance to doxorubicin, etoposide, mitomycin C and other chemotherapeutic drugs. Studies have found that the mRNA level of glyoxalase I in many human tumor cell lines that are multi-resistant to existing clinical chemotherapeutic drugs is generally high. The cells also exhibit multidrug resistance. The specific mechanism of the high expression of glyoxalase I causing multi-resistance to chemotherapeutic drugs is still unclear, but it is definitely closely related to Methylglyoxal Miel, the glyoxalase I inhibitor p-bromobenzyl glutathione After cyclopentadiate was applied to the cells, the intracellular methylglyoxal content was significantly increased, and the cells regained their sensitivity to antitumor drugs. In addition, it has been reported in the literature that methylglyoxal can enhance the killing effect of cisplatin on myeloma cells by activating the δ subunit of protein kinase C (PKC). about 4 times.

Method 1: Add 160 mL of water, 50 mL of acetone, 37.2 mL of glacial acetic acid and 4.0 g of potassium chlorate into a 500 mL four-neck flask, and install a mechanical stirrer, thermometer, reflux condenser and long-neck dropping funnel. Start the mechanical stirring, control the temperature of the water bath at 60-75 °C, and the temperature in the bottle at about 60 °C, add 35.4 mL of bromine with a dropping funnel, and control the drop rate to prevent unreacted bromine from accumulating. After the addition of bromine, the reaction was continued for 0.5 h. After the color of the solution faded, 80 mL of ice water was added to dilute the reaction solution, cooled to 10 °C, and then 100 g of anhydrous sodium carbonate was added to make the Congo red neutral. The oil layer was separated, dried with 8g of anhydrous calcium chloride, distilled under reduced pressure, and the fractions at 40-42°C/1733Pa were collected, and the yield was 63.5% (the literature was 50%-51%). The collected fractions and DMSO were added into a 250 mL three-necked flask according to an appropriate ratio of ingredients, air was introduced, and the temperature was controlled at a suitable temperature, and the reaction was carried out under reflux for 8 hours under electromagnetic stirring. After the reaction was completed, fractional distillation was carried out at atmospheric pressure, and the fractions at 71.5-73.0 °C were collected, and the refractive index was n24.6D=1.3803 (document n20D=1.4209).

Method 2: Weigh 89.4 g (0.3 mol) of potassium dichromate dihydrate, dissolve it in 400 mL of water, slowly add 63.9 mL (1.2 mol) of concentrated sulfuric acid dropwise while stirring, stir well, and after cooling, transfer to a dropping funnel middle. In a 1000mL three-necked flask, first add 32.9mL (0.45mol) of 1,2-propanediol and 1.0g of manganese sulfate as catalysts, then connect a distillation device to the middle port, a dropping funnel at one port, and a glass stopper at the other port. Glass tube, the lower mouth of the glass tube should be inserted below the liquid level. First, introduce nitrogen gas into the three-necked flask from the glass tube, and then heat the three-necked flask with an electric heating jacket with a pressure regulator. After a few minutes, drip the above prepared solution from the dropping funnel, and the dripping is completed in about 50-70 minutes.

After dripping, continue heating and distillation for 15min (pay attention to closing the piston of the dropping funnel), and collect about 250mL of yellow-green distillate. The distillate was extracted four times with 450 mL of anhydrous ether. After extraction, the aqueous layer was discarded, and the extracts were combined. Wash with saturated aqueous sodium bicarbonate until neutral, separate the aqueous layer, and dry the ether layer with anhydrous magnesium sulfate for 4 h. Filtration, water bath 45～50℃ to evaporate ether, then boiling water bath fractionation, collecting 71～73℃ fractions to obtain yellow-green liquid with special odor, yield 49%～50%. The product was stored at 0°C under nitrogen. After inspection, this fraction can make Schiff’s reagent appear purple, make Fehling’s reagent appear brick-red precipitate, and form orange-red precipitate with 2,4-dinitrobenzene trap (recrystallized in nitrobenzene), measure its melting point It is 308～309 ℃ (the literature is 308～309 ℃). After purification, the boiling point of glyoxal measured by micro method is 72°C (the literature is 72°C).