What is Diethanolamine Sigma? 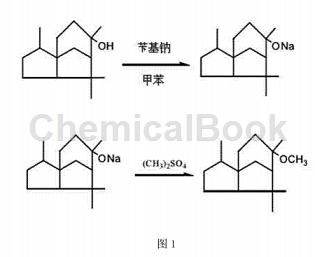 Examples are as follows:
In a reactor with a stirring and reflux condenser, add 170ml of toluene and 137g of benzyl sodium, heat to reflux under stirring, add 3,6,8,8-tetramethyloctahydro-1H-3a dropwise, A solution of 223g of 7-methylene azulen-6-ol and 200ml of toluene, the temperature of the reaction system was controlled to reflux, and the dropwise addition time was 30min. After the dropwise addition, the reaction was refluxed for 1.5h, then cooled to room temperature, and the first step reaction was completed.
Continue to add 122g of dimethyl sulfate dropwise, and the dropwise addition is completed within 30min. After the dropwise addition, react at 70°C for 2.5h, wash the reaction mixture with 100ml of 10% sodium bicarbonate solution, let the layers stand, and separate the water layer , the oil layer was washed with 10% aqueous sodium chloride solution until neutral. Atmospheric pressure distillation recovers the solvent toluene first, and then carries out rectification. A superheated steam conduit is arranged at the bottom of the rectifying kettle 2, and a steam injection distributor 1 is installed at the end of the conduit, so that the superheated steam can be evenly rushed into the material, and plays the role of heat transfer, stirring, tumbling material and bubbling.
The rectifying tower 3 is equipped with a two-stage gradient condenser device, and the rectifying tower 3 is connected with the two-stage gradient condenser device through the distributor 4. The cooling temperature of the first-stage condenser 5 is controlled at 160-170°C, and the collected 160-170°C The fraction of /0.27kPa is 214 grams of methyl cedryl ether. Water vapor and low-boiling components pass through the first-stage condenser 5 and enter the second-stage condenser 6. The cooling temperature is controlled at 50-60°C. The condensed fractions then pass through the oil-water separator to obtain low-boiling components.
Method 2: Cedaryl alcohol and sodium amide are heated and reacted in a solvent to form cedryl alcohol sodium, and then reacted with methyl iodide to obtain methyl cedryl ether, and the fraction at 118-120°C/250Pa is collected by vacuum distillation to obtain the finished product. Greater than 96%, purity above 97%.
Examples are as follows:
In a 1000L autoclave, add 200L benzene, under stirring, add 35Kg sodium amide, close the autoclave, raise the temperature to 80°C and stir for 0.5 hours, then put the solution of 195Kg cedarwood alcohol and 250Kg benzene in the dissolving pot Put it into an autoclave, react at 80° C., and until the conversion rate reaches more than 99% by sampling analysis, the first step of reaction ends. The reaction mixture was cooled to 30°C, 162Kg of iodomethane was added, the temperature was slowly raised to 40°C with stirring, and the reaction was carried out for 1 hour. Then, the temperature was uniformly raised to 80°C within 2 hours, and the reaction was continued for 4 hours.
After the methylation reaction finishes, cool down, add 50Kg of 12% sodium hydroxide solution, after washing, add water to wash until neutral. Recover the solvent to obtain the crude product, and then rectify under reduced pressure to collect the distillate at 118-120°C/250Pa to obtain 204Kg of methyl cedryl ether product, the yield is 98%, the content of chromatographic analysis is more than 97%, and the refractive index nD201.4950-1.4970 , relative density d4200.9770 ~ 0.9790, with amber woody aroma.