Lithium diisopropylamide (LDA) is a sterically hindered non-nucleophilic strong base reagent widely used in organic synthesis, with pka=35.7 in tetrahydrofuran, and is often used to generate carbanions and enolate ions.

LDA is widely used in the enolization of aldehydes, ketones and esters, and the generated enolate ions are captured by silicon derivatives or sulfonyl groups to generate corresponding silyl ethers or sulfonates. Since the sulfonate group is attached to the sp2-hybridized carbon atom, the subsequent metal-catalyzed reaction is very easy to occur, making this reaction more interesting. The reaction is generally completed within a few minutes at low temperature, and the reaction conditions are very mild, and other functional groups are not significantly affected. The yield of the product is mainly affected by the activity of the capture reagent, with triflate very easily giving satisfactory results (Equation 1 and Equation 2).

The most immediate use of LDA is to catalyze the α-alkylation of aldehydes, ketones, esters and amides. Due to the activation of the α-methylene and methine groups by the carbonyl groups in these compounds, LDA can take up their protons to generate carbanions at low temperatures. A wide variety of groups can be conveniently introduced in the presence of various alkylating agents. Because the reagent decomposes above 0°C, it is sometimes necessary to add equimolar HMPA as an auxiliary solvent to increase the reactivity and stability of the reagent. The reaction can be completed within 1~2h at low temperature, and the olefinic bond is not affected in any way (formula 3), and the alkylating reagent has an ester group and is not affected in any way (formula 4). However, the reaction of the amide requires warming to room temperature (Equation 5). 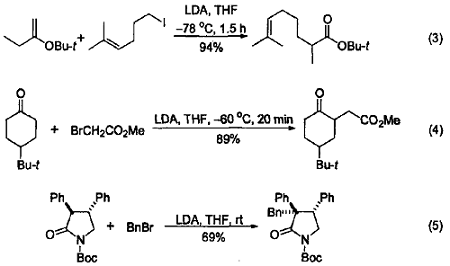 An interesting phenomenon is that when 1,3-dicarbonyl compounds undergo α-position alkylation under the action of LDA, the alkylation occurs not at the 2-position, which is thought to be more acidic, but at the α-position next to it. -bit. This case has very good regioselectivity in the reaction of 1,3-ketoesters