ranezolid (LinezolidZyvox, U-100766, PNU-100766, linezolid, linezolid, morpholinox, morpholinox) is a new type of oxazolidone developed and produced by Pharmacia & Upiohn Company of the United States (acquired by Pfizer). It is a synthetic antibacterial drug, which was approved by the US FDA on April 18, 2000. This item is the initial medicine authorized for the treatment of methicillin-resistant Staphylococcus aureus infection in the USA in 40 years.Listed in my country, it belongs to the class B drug of medical insurance.

Linezolid is a synthetic oxazolidinone antibacterial drug developed by Pharmacia and Upjohn for the treatment of serious infections caused by Gram-positive bacteria that are resistant to several other antibiotics. Linezolid is active against most disease-causing Gram-positive bacteria, including streptococci, vancomycin-resistant enterococci (VRE), and methicillin-resistant Staphylococcus aureus (MRSA). It is used to treat skin infections and pneumonia, but may be used for other infections, such as drug-resistant tuberculosis. The method of use is oral or intravenous injection.

Linezolid has a narrow therapeutic window (C0 = 2-7 μg/mL), and the trough concentration can vary up to 20-fold between individuals. It is metabolized by non-liver enzymes, and about 35% is excreted by the kidneys in the original form, and no dose adjustment is required for patients with mild to moderate hepatic insufficiency and renal insufficiency. However, studies have shown that when patients with renal insufficiency use conventional doses of linezolid, the incidence of thrombocytopenia and anemia is significantly higher than that in patients with normal renal function, which is related to the persistently high concentration of linezolid.
In addition, the plasma concentration of linezolid in critically ill patients varies greatly among individuals and interacts with certain drugs. In patients with longer courses of treatment, linezolid exhibits an accumulative effect; in patients on continuous renal replacement therapy (CRRT), increased drug clearance can affect effective drug concentrations. Therefore, drug concentration monitoring can provide individualized medication guidance for patients and ensure the effectiveness and safety of medication.

In 1987, through further structural optimization of S1623, DuPont disclosed two candidate compounds, DuP-105 and DuP-721. Studies have shown that these two compounds have significant inhibitory activity against Gram-positive bacteria including MRSA, and animal experiments have also shown that they have good drug metabolism properties.

Regrettably, DuP-105 and DuP-721 showed significant toxicity in late-stage clinical trials, and eventually these two compounds were forced to stop development.
However, such compounds have begun to attract the attention of researchers because of their novel structures and novel mechanisms of action.
Upjohn Company designed and synthesized linezolid for the first time
Based on the early research results of DuPont, Upjohn Company, also from the United States, established a special antibacterial research team of oxazolidinone compounds to continue to study this novel discovery.
After structure-activity analysis, Upjohn wanted to limit the rotation direction of the compound DuP-721 methyl ketone by introducing a five-membered or six-membered ring to investigate its effect on the antibacterial activity.
The researchers designed and synthesized a number of oxazolidinone compounds incorporating indanone structural units. They found that compound U-82965 had similar antibacterial activity and pharmacokinetic characteristics to DuP-721 designed by DuPont.

In 1989, it was at this time that DuP-105 and DuP-721 were reported to be severely toxic in clinical trials.
This report suggests that U-82965 from Upjohn may also be aborted as a result.
In order to thoroughly understand whether oxazolidinones can control their severe toxicity through structural modification, Upjohn’s pharmacologist Piper Richard designed a toxicity comparison test for this purpose. -82965 and racemic DuP-721 were subjected to a comparative toxicity evaluation test in rats, orally, twice a day, 100 mg/kg each time, for 30 consecutive days.
The experimental results found that some rats in the DuP-721 experimental group showed serious toxic side effects, while the U-82965 experimental group showed few serious side effects.
This result is very fortunate for Upjohn researchers.
However, Upjohn later discovered that DuPont’s earlier patent had already carried out structural protection for the oxazolidinones that introduced the indanone building block.
In fact, as a real scientific researcher, at this time, it should be very calm. The toxicity comparison test of Upjohn’s U-82965 and DuP2721 (only the difference between cyclic and methyl ketone) has confirmed that not only the two In a more distant sense, this experiment confirms that the oxazolidinones can approach perfection through structural modification.
Next, Upjohn’s researchers focused on molecular design based on the active core structure of U-82965 and avoiding DuPont’s patent restrictions.
To this end, researchers designed and synthesized a class of fused heterocyclic oxazolidinone analogs U-97456 and U-85910. Animal experiments showed that both showed high safety, and U-97456 also showed Significantly improved antibacterial activity and excellent pharmacokinetic properties. 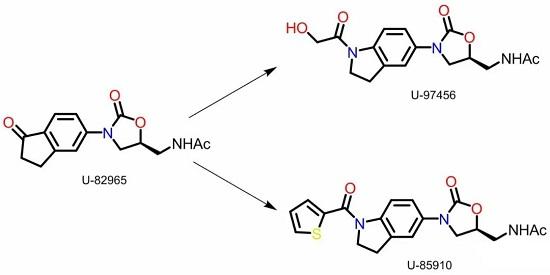 Pharmacological studies have shown that the monofluoro-substituted piperazine ring derivatives not only have good in vitro and in vivo activities, but also have acceptable safety, water solubility and good pharmacokinetic properties.
Upjohn selected the monofluoro-substituted piperazine ring series of oxazolidinone derivatives as the focus of further development.