DL-1,2-Hexanediol is an essential chemical raw material, which is mostly made use of in inks for shade inkjet printers, advanced cosmetics and also artificial resources in the pharmaceutical sector. Before 2011, the majority of them were used by business from Japan, the USA, Germany and also other countries in China.

1. Application in ink
Printer is a device extensively made use of in modern culture. DL-1,2- Hexanediolcan be utilized as a basic material for inkjet printing ink in printers, as well as it is commonly utilized.

DL-1,2- Hexanediol is contributed to eyelid scrubs by O’Showsoft in the USA, and DL-1,2- Hexanediol is additionally added to skin treatment compositions by Givaudan Co., Ltd. as well as Japan Co., Ltd. Usage in place of various other fungicidal chemicals. Dow Global Technologies utilizes DL-1,2- Hexanediol rather than alcohol to include in fragrances, first of all to lower skin irritation, as well as secondly to reduce using surfactants as a result of its outstanding solvent and also solubilizing ability. Products with greater stability can be acquired. Aesthetic business in China likewise add DL-1,2- Hexanediol to cosmetics, which is antiseptic as well as disinfectant as well as less annoying to the skin, boosting the security of skin care products.

4. Other applications
DL-1,2-Hexanediol can be made use of in sophisticated layers, advanced adhesives, adhesives, and so on.

There are numerous synthetic routes for DL-1,2-hexanediol, and also the starting products used are 1-hexene, acid anhydride, heterocycle, ester, etc, yet it is adequately considered according to variables such as resources source, procedure conditions, as well as environmental management requirements., the most studied is the artificial course of DL-1,2-hexanediol utilizing 1-hexene as the beginning product. The path is mainly two actions: epoxidation as well as hydrolysis. In the primary step, 1-hexene is epoxidized to develop butyl ethylene oxide, and also in the 2nd action, butyl ethylene oxide is further hydrolyzed to develop the target product DL-1,2-hexanediol. On top of that, 1-hexene can also get DL-1,2-hexanediol by heterocyclization as well as hydrolysis. There are lots of approaches for the epoxidation of olefins, the Haakon method and the chlorohydrin technique are the even more generally made use of methods. There are several drivers utilized, and compounds of shift steels such as V, Mo, Ti, and also W are commonly made use of.

Chlorohydrin method is a process in which chlorine gas and lime milk are reactants to epoxidize olefins. The production process is divided into three parts: chlorohydrin, saponification and refining. The chlorohydrin method was used earlier in the industry and was mostly used in the synthesis of propylene oxide and ethylene oxide. However, due to the serious problem of the three wastes, they have been gradually eliminated in foreign countries. The reaction mechanism is shown in Figure 1. 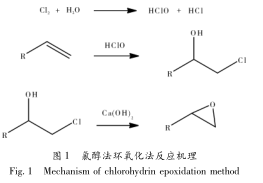 H 2 O 2 is the most frequently used oxidant in recent years. By oxidizing organic acids to peroxyacids, the peroxyacids epoxidize the double bonds of olefins, and finally hydrolyzed to obtain diols. The reaction mechanism is shown in Figure 2. 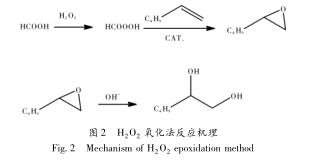 The advantage of H 2O2 oxidation method is that H 2O2 is of good quality and low price, and after being reduced, water is generated, and the environmental pollution is small, which is suitable for industrial production requirements. The research on H 2O2 oxidation of alkene to synthesize diol is earlier, while the research on H 2O2 oxidation of 1-hexene to synthesize DL-1,2-hexanediol is late. The latter can learn from the former method, but due to the two The differences in the physical and chemical properties of the catalysts lead to large differences in the use of epoxidation methods and catalysts.

It can be seen that the reaction time is shortened and the selectivity is improved in the H 2O2 oxidation method after adding the catalyst, so the catalyst research of this reaction has become a hot direction. In most articles, the catalysts used in the epoxidation of 1-hexene to butyl ethylene oxide are mostly oxides or complexes of transition metals. For example, Wei Dongchu et al. used metal oxides V2 O5 /Nb2O5 as catalysts. , tert-butanol was used as solvent, 30% hydrogen peroxide was used as oxidant, and the yield of DL-1,2-hexanediol was 85%. Such catalysts are generally homogeneous catalysts, which are difficult to recycle from the system, increase the difficulty of post-processing, and increase the cost.

In order to solve this problem, scholars have done a lot of research on the immobilization method of homogeneous catalysts. It is supported on the solid-supported ionic liquid to make the homogeneous catalyst heterogeneous, which is convenient for the recycling of the catalyst. Li Bindong et al. used polystyrene resin-supported heteropolyacid as a phase transfer catalyst to synthesize DL-1,2-hexanediol from 1-hexene, the yield was 94%, and the purity was 98%.

SahaDebraj et al. used metal-organic frameworks (MOFs) as catalysts and hydrogen peroxide as the oxidant to react 1-hexene to obtain the target product at a lower temperature, in which the Cu and alkaline earth metal active centers of the catalyst acted in turn in epoxidation and oxidization. In the two-step reaction of epoxide to alcohol, the product yield is 100%, and the catalyst can be recycled after treatment with little effect on catalytic activity. Shi Xianying et al. used SiO2 as a carrier to immobilize the ionic liquid, and then supported the catalytic active center such as peroxophosphotungstate catalyst, and added 30% hydrogen peroxide to epoxidize 1-hexene, etc. The yield of 1,2-hexanediol was 81%. The catalyst can be recovered 8 times without significant decrease in the reaction yield. Other catalysts are ferric chloride, lipase, etc.

For example, Jinyintai from South Korea added ferric toluenesulfonate hexahydrate or ferric chloride aqueous solution to the mixture of 1-hexene, 30% hydrogen peroxide and formic acid, reacted for 4 to 6 h, and distilled to obtain a yield of more than 96% and GC purity. More than 99% DL-1,2-hexanediol. Sarma Kuladip et al. used a lipase as catalyst, 50% hydrogen peroxide as oxidant, ethyl acetate as solvent, and reacted under microwave irradiation for 10 min, and the yield of DL-1,2-hexanediol was 72%. The advantage of the solid-supported catalyst is that it is beneficial to recovery, but there are also some problems. For example, the stability of the solid-supported catalyst has not yet reached an ideal level and needs to be further strengthened.

Oxygen, as an oxygen source, is an ideal oxidant because it is easily available, clean and pollution-free. Therefore, scholars have studied the epoxidation of 1-hexene using oxygen as an oxidant. However, studies have found that the reaction is prone to produce by-products and cause difficulties. At present, most of the reported literatures add initiators and use metal complexes. Some progress has been made in research, but there are certain difficulties in the recovery and reuse of catalysts and the improvement of reaction yields.

Bai Xiaoguang et al. used oxygen as the oxygen source, and independently synthesized the metalloporphyrin T(o-Cl)PPMn(III)Cl as the catalyst and isobutyraldehyde as the solvent to catalyze the epoxidation of 1-hexene at room temperature and pressure. The effects of solvent ratio, catalyst dosage, and different active centers of metalloporphyrin on the conversion rate of raw materials, the yield and selectivity of target products were studied, and the optimal process conditions for the reaction were finally obtained.

The selectivity was 72.9% and the yield was 39.8%. Chen Xianmin et al. used Pd(CH3 CN) 2 Cl 2 as the catalyst and oxygen as the oxidant to oxidize 1-hexene at room temperature for 6 h. After hydrolysis, DL-1,2-hexanediol was generated with a yield of 72%. Wong WaiKwok et al. synthesized catalyst trans-[RuCl 2 {CE 3 -1R, 2RP(NH)(NH)P}(PPh 3 )], which can catalyze various addition reactions, in which 1-hexene was heated at 130 ℃ and oxygen pressure When the reaction temperature is 5 MPa, the conversion rate of reaction 2 h is 39%, and the selectivity is 55%.

Organic oxides such as methylmorpholine oxide are another source of oxygen that can be used, and 1-hexene peroxide can be mentioned in several literatures. Nagayama et al. reacted methylmorpholine oxide with 1-hexene using osmium tetroxide as a catalyst to obtain DL-1,2-hexanediol with a yield of 89%. Later scholars improved the reaction yield to 97% by modifying the catalyst for this reaction.

Inorganic substances such as sodium periodate NaIO 4 , potassium ferricyanide (K 3 Fe(CN) 6 ), potassium hydrogen persulfate (oxone) can also epoxidize 1-hexene. By adding catalysts and other measures, the epoxidation selectivity can be improved. Gancitano et al. used RuCl3 as a catalyst. In a two-phase solvent (ethyl acetate:acetonitrile:water=3:3:1), NaIO4 could oxidatively hydrolyze various terminal alkenes into diols, in which 1-hexene reacted to generate DL- The yield of 1,2-hexanediol is 100%, and the reaction speed is extremely fast, only 3 min is required.

Hajamis et al. used potassium ferricyanide (K 3 Fe(CN) 6 ) as the reactant, combined the catalyst OsO4 with the chiral auxiliary cinchona alkaloid (such as cinchonine), and used styrene, α-methylstyrene, etc. , 1-hexene and other asymmetric dihydroxylation. The yield of 1-hexene to DL-1,2-hexanediol was 97%. Rani Shikha et al. added potassium hydrogen persulfate and potassium hydrogen carbonate to a mixed solvent of acetone and water (2:0.5) containing 1-hexene, and stirred for 30-60 min to generate the target product.

With the accelerating process of human industrialization, environmental protection issues have become increasingly prominent. Under this background, organic electrochemical synthesis methods have emerged. This method is to bring electrochemistry into organic synthesis, without the above-mentioned various oxidants, the reactants gain and lose electrons on the electrode to realize the epoxidation reaction process, which is a “green synthesis” method. Organic electrochemical synthesis is generally carried out at room temperature and pressure or under low pressure, with high selectivity, less by-products, and less separation and purification work. It is a synthetic method that fully conforms to modern chemistry.

In 1989, Khan et al reported that with [Ru III (H-dmg) 2 -(ClO 4 ) 2 ]- as the catalyst, cyclohexene as the reactant, the electrocatalytic products were mainly epoxy compounds; Laurent Gaillon et al. The epoxidation of olefins was also achieved by electrochemical methods at room temperature using Mn-containing catalysts as solvents. The research of many scholars has provided another possibility for the epoxidation of 1-hexene, but due to the high requirements for the selection of electrode materials, catalysts, electrolytes, etc., this method restricts the industrial application of this method. application. Therefore, further in-depth research is required.

Khusainova et al. first reacted 1-hexene with BCl3 · SMe 2 in the presence of catalyst (η5-C 5 H 5 ) 2 TiCl 2 to generate 2-butyl-1-chloro-borane, the yield of this step was 75% , and then react with hydrogen peroxide to obtain DL-1,2-hexanediol and other by-product alcohols. Lu Jiaxi, the former president of the Chinese Academy of Sciences, and Gignere, a French-Canadian scientist, cleverly used urea (H 2 NCONH 2 ) and H 2 O 2 to form an adduct H 2 NCONH 2 ·H 2 O 2 , which not only stabilized H 2 O 2 , but also And the structure has not changed. Laha et al. used anhydrous H2 NCONH 2 ·H 2 O 2 as the oxidant, methanol as the solvent, and reacted with TS-1 and TS-2 molecular sieves to obtain epoxide and 1,2-hexanediol. alcohol.