The main process of existing liquid chromatography is to adopt high performance liquid chromatography (HPLC) to analyze and detect after first solvent extraction. Because Decabromodiphenyl Oxide is dispersed in plastic solids, Soxhlet extraction is traditionally used to extract Decabromodiphenyl Oxide from plastic solids, but due to the unsatisfactory extraction effect, supercritical fluid extraction, Methods such as pressure extraction, ultrasonic-assisted extraction and microwave-assisted extraction. The extracted Decabromodiphenyl Oxide can be analyzed and detected by conventional HPLC conditions. For example, in the recommended standard SN/T 2005.1-2005, C18 bonded phase is used as stationary phase, methanol and phosphate buffer solution are used as mobile phase, After gradient elution, UV light with a wavelength of 226 nm was used for detection.

The biggest disadvantage of the existing liquid chromatography is that the solvent extraction time is long (at least two hours), and if the enhanced extraction methods such as supercritical fluid extraction are used, expensive equipment is required, and the quality of the HPLC analysis results is poor and it is difficult to be accurate. Quantitative. The Chinese invention patent whose patent application number is 200910050956.1 discloses a method for analyzing and measuring brominated flame retardants in the plastic parts of waste household appliances. The biggest difference between this method and the recommended standard SN/T 2005.1-2005 is that a new sample preparation method is adopted, the solvent of Soxhlet extraction is changed to isopropanol, and acetonitrile and water are used as the mobile phase of HPLC. The essence of this method is to shorten the liquid-solid mass transfer distance, reduce the mass transfer resistance and thus reduce the extraction time to 1 hour, and the quality of the HPLC chromatogram is also greatly improved.

The object of the invention is to overcome the defect of the prior art, a kind of method of liquid chromatographic determination of decabromodiphenyl ether content in plastic is provided. The present invention proposes that decabromodiphenyl ether is completely dissolved together with solid plastics, and the large mass transfer resistance between solid and liquid is converted into the small mass transfer resistance inside the liquid phase, thereby greatly reducing the time of analysis and treatment. The invention can realize the rapid analysis of the decabromodiphenyl ether flame retardant content in the plastics of various electronic and electrical products. These electronic and electrical products include televisions, computers, mobile phones, etc. The main components of their plastics are polystyrene, high-impact polystyrene and ABS resin.

The method for determining the content of decabromodiphenyl ether in plastics by liquid chromatography includes the following steps: dissolving the plastics in tetrahydrofuran to form a solution, and after the solution is centrifuged; taking the supernatant for microfiltration, and the filtrate is a solution to be tested by chromatography; The content of decabromodiphenyl ether in the solution to be tested was determined by high performance liquid chromatography.

A method for determining the content of decabromodiphenyl ether in plastics by liquid chromatography, which specifically includes the following steps

(2) get solution 2-10mL, centrifuge more than 3 minutes, draw supernatant after microfiltration, and filtrate is solution to be tested;

(3) Determining the decabromodiphenyl ether content in the solution to be tested by high performance liquid chromatography.

The plastic content in the solution was below 10 mg/mL.

The dissolution time is 10-30 minutes, and it is completely dissolved.

The microfiltration is carried out by using a tetrahydrofuran-resistant filter membrane with a pore size of less than 0.46 μm.

The assay was performed by high performance liquid chromatography with external standard method.

The mobile phase of described high performance liquid chromatography adopts the mixed solvent of tetrahydrofuran and methanol in a volume ratio of 90:10.

The high performance liquid chromatography adopts an ultraviolet detector with a wavelength of 300 nm.

The rotational speed of the centrifugation is greater than 1000 rpm.

(1) Since most of the plastics using decabromodiphenyl ether as flame retardant are polystyrene, and tetrahydrofuran has good solubility for such plastics, and tetrahydrofuran is also a good solvent for decabromodiphenyl ether, its solubility It is 10-20 times that of existing alcohol and ketone solvents (such as isopropanol and acetone) used in various solid-liquid extraction, thus ensuring the rapid dissolution of solid samples. In addition, since all solid substances are completely dissolved in the solvent, the yield problem caused by incomplete extraction of decabromodiphenyl ether in the existing extraction technology is also avoided. Thus, adopting the technology that the tetrahydrofuran proposed by the present invention completely dissolves the solid sample can greatly shorten the sample processing time.

(2) Due to the complex composition of plastic samples, especially for a variety of electronic and electrical plastics, in addition to polystyrene plastics and decabromodiphenyl ether flame retardants, there are inorganic substances such as fillers and dyes. These substances Will interfere with and disrupt chromatographic analysis. For this reason, the present invention adopts the purification technology of first centrifugation and then microfiltration, which has the characteristics of low cost and high applicability.

(3) because the present invention adopts solid sample complete dissolving technology, so in the solution to be tested, in addition to containing the decabromodiphenyl ether that needs to detect, also contain a large amount of polystyrene. Existing HPLC methods for detecting polybrominated diphenyl ethers all use methanol or acetonitrile as the main mobile phase system, and obviously polystyrene has the problem of immiscibility in this mobile phase system, especially for the higher polystyrene content , resulting in a serious decline in the quality of the chromatogram. For this reason, the present invention re-optimizes the mobile phase conditions for chromatographic separation, considers the similarity of the mobile phase and the sample solvent syst

(4) The present invention adopts the most commonly used HPLC ultraviolet detection and analysis to measure the content of decabromodiphenyl ether. Since tetrahydrofuran is used as the main mobile phase system, and tetrahydrofuran has a high ultraviolet cut-off wavelength, the increase of the detection wavelength can reduce the interference caused by the background absorption of the mobile phase, but the response of decabromodiphenyl ether is also weakened at the same time. The invention comprehensively considers the measurement noise caused by the background absorption of the mobile phase and the signal response of the detection substance, and adopts an ultraviolet detector with a wavelength of 300 nm.

The Specific Embodiment of Decabromodiphenyl Oxide 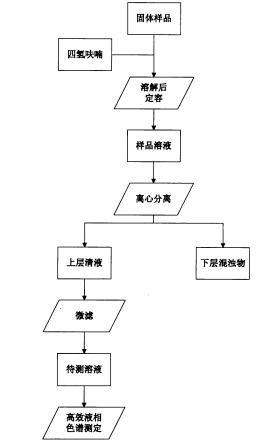 As shown in Figure 1, the present invention is a process for determining the content of Decabromodiphenyl Oxide in high-impact polystyrene plastics. The solid sample was uniformly mixed by banburying using a high-impact polystyrene plastic masterbatch with a domestic brand of PS-I and an industrial product of Decabromodiphenyl Oxide, wherein the mass content of Decabromodiphenyl Oxide was 10.3%. After the above-mentioned solid sample was crushed into a solid powder with an average size of 0.5 mm with a blade solid crusher, 0.5821 g of the solid powder was weighed with an analytical balance and placed in a 150 mL conical flask, and then about 50 mL of analytically pure tetrahydrofuran was added. solvent. The above solvent and the solid sample powder were magnetically stirred for 10 minutes to completely dissolve the solid sample in the tetrahydrofuran solvent. The above liquid was transferred into a 100 mL volumetric flask, and the volume was adjusted with tetrahydrofuran to prepare a sample solution.

About 3 mL of the sample solution was taken and placed in a 5 mL glass centrifuge tube, and centrifuged at 2000 rpm for 10 minutes to separate the sample solution into a supernatant and a lower turbid. About 2 mL of the supernatant was carefully drawn with a 2.5 mL glass syringe syringe, and filtered with a 0.25 μm pore size polytetrafluoroethylene syringe filter to obtain the solution to be tested. The filtered solution to be tested was collected with a 1.5mL chromatographic injection bottle and prepared for HPLC analysis and determination.