What is Cristaux De Menthol?

Cristaux De Menthol, also known as hexahydrothymol, common name menthol, scientific name 5-methyl-2-isopropyl-cyclohexanol. It is a very important cycloterpene alcohol. Levo-menthol has a characteristic mint aroma and has a cooling effect. Racemic-menthol also has cooling effect, other isomers have no cooling effect. L-menthol is widely used in medicine and hygiene, and can be used as poultice, ointment, analgesic, local anesthetic, cooling agent, antipruritic, mouthwash, bactericide, as well as for the treatment of toothache, Stomach pain, neuralgia lozenges, etc.; the second major use is spice, levomenthol is the spice with the greatest demand among the cyclic monoterpene alcohols, and can be used as tobacco spice, used together with peppermint oil to prepare toothpaste flavor, and other spice. Preparation of toilet water; Menthol can also be used as a flavoring agent for various foods, such as for the preparation of candy, chewing gum, cakes, fruit wine, refreshing drinks, etc.

Cristaux De Menthol used to be mainly isolated from natural peppermint oil. Natural menthol is affected by weather and sunshine, and its output and quality will fluctuate, and the price will also fluctuate, and the production cost of users is not easy to determine. The quality of synthetic Cristaux De Menthol products is stable, and its price is relatively stable, which is easier for manufacturers to accept. There is not much difference in quality between synthetic menthol and natural products; the former is lower than the latter in price. Due to the increasing industrial use of menthol: in daily chemical, cosmetic, pharmaceutical, food, beverage and tobacco industries, its demand is increasing substantially. Historically, Cristaux De Menthol was extracted from plants, and the yield was greatly affected by seasons, planting areas, etc., resulting in very large price fluctuations.

Since Germany’s Dezhixin Company and Japan’s Takasago Company launched chemically synthesized Cristaux De Menthol, the price has stabilized. Synthetic menthol has a stable taste, relatively cheap price, and is easily accepted by manufacturers. Due to the destruction of the natural environment and the increase in labor costs and other factors As a result, the production of natural menthol is becoming less and less, resulting in a slow rise in the price of Cristaux De Menthol. Therefore, vigorously developing the synthetic menthol industry has good economic prospects.

Cristaux De Menthol can be purified from natural mint crude oil and can also be prepared by synthetic method. The essential oil obtained by steam distillation of the aerial parts (stems, branches, leaves and inflorescences) of the Lamiaceae plant mint is called mint crude oil, and the oil yield is 0.5-0.6. There are various methods of synthesizing the thin hemispheres.
1. Manufacture from citronellal Utilize the property of citronellal to be easily cyclized into Cristaux De Menthol, cyclize D-citronellal into L-isopulegol with an acid catalyst (such as silica gel), and separate L-isopulegol Alcohol, hydrogenated to produce levo-mint. Its stereotutor structure can be partially converted into D-citronellal by thermal cracking, which can be recycled.
2. Manufactured from thymol In the presence of aluminum m-cresol, the alkylation reaction of m-cresol is carried out to generate thymol. Catalytic hydrogenation yields all four pairs of menthol stereoisomers (ie, racemic Cristaux De Menthol, racemic neomenthol, racemic isoCristaux De Menthol, and racemic neoisomenthol). It is distilled, the Cristaux De Menthol fraction is de-rotated, and the ester is produced and recrystallized repeatedly to separate and optically separate the isomers. The separated L-menthol ester can be saponified to obtain menthol.

See Scheme 4 for the route of German Dezhixin Company, which is now the synthetic method of Cristaux De Menthol with the largest output in the world. The advantage of this route is that the synthesis steps are relatively simple, and the disadvantage is that the separation and recovery process is cumbersome. First, m-cresol and propylene are used in Thymol 9 was obtained in 63% yield under Lewis acid catalysis [16], and then the benzene ring was hydrogenated under the catalysis of a nickel/iron/chromium/aluminum alloy to obtain various stereoisomer mixtures of Cristaux De Menthol 6, The yield of this step is 99.5%, which contains 60.3% of the mixture of L-menthol (1R,3R,4S)-6 and D-menthol (1S,3S,4R)-6, and 39.2% of other stereoisomers. ( Mixtures of 1R,3R,4S)-6 and (1S,3S,4R)-6 and other stereoisomers can be separated by rectification. (1R,3R,4S)-6 and (1S,3S,4R) -6 is esterified with benzoate to obtain (1R, 3R, 4S)-10 and (1S, 3S, 4R)-10, respectively, and then inoculated with optically pure menthyl benzoate to obtain high-purity ( 1R, 3R, 4S)-10 and (1S, 3S, 4R)-10, and finally simple hydrolysis of the separated esters can obtain high-purity L-Cristaux De Menthol and D-Menthol. In addition to the product L-Menthol In addition, all other configurations of menthol can be recovered by catalytic dehydrogenation again to obtain thymol 9, and then hydrogenated for separation. The total yield of this route can exceed 90%. For the separation step, Dezhixin The company invented the lipase separation technology in 2002. For example, using lipase extracted from Candida for separation, the ee value of L-menthol obtained can be nearly 100%, but the cost is too high and it is not industrialized. 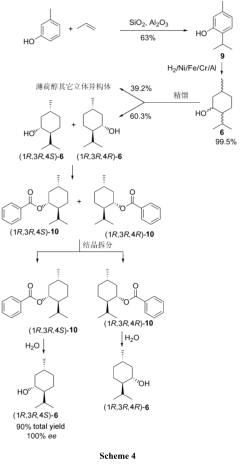