What is Benzene Styrene?

Benzene Styrene is an organic compound formed by replacing a hydrogen atom of ethylene with benzene. The electrons of the vinyl group are conjugated with the benzene ring. It is a kind of aromatic hydrocarbon. Molecular formula C8H8, simple structural formula C6H5CH=CH2. Exist in Suhe balsam (a natural spice). Colorless, oily liquid with special aroma. Melting point -30.6°C, boiling point 145.2°C, relative density 0.9060 (20/4°C), refractive index 1.5469, viscosity 0.762cPat68°F. Insoluble in water, soluble in ethanol and ether, gradually polymerized and oxidized when exposed to the air, and should be stabilized by adding a polymerization inhibitor [hydroquinone or tert-butylcatechol (0.0002% to 0.002%) agent to delay its polymerization] before storage. Industrially, it is an important monomer of synthetic resin, ion exchange resin and synthetic rubber. Benzene Styrene can also undergo addition reactions unique to alkenes.

In industry, Benzene Styrene can be prepared by catalytic dehydrogenation of ethylbenzene. It can be obtained by heating cinnamic acid in the laboratory.

As early as 1850, it was known that Benzene Styrene does not react with natural resins but polymerizes. But it wasn’t used industrially until the 1830s, when styrene was produced by dehydrogenating styrene (a compound of ethylene and benzene extracted from gasoline). In 1937, German Farben and American Dow Chemical Company carried out the industrial production of Benzene Styrene by using ethylbenzene dehydrogenation method. During World War II, production expanded rapidly due to the need to produce synthetic rubber. After the war, styrene production skyrocketed due to the development of Benzene Styrene-based plastics, and several other production methods emerged. For example: In 1966, the American Haakon Company developed the ethylbenzene co-oxidation method; in the early 1970s, Japan and other countries used extractive distillation to separate styrene from pyrolysis gasoline, and the amount of styrene produced depended on the scale of ethylene production. In 1981, the total capacity of Benzene Styrene devices in the world reached 17.13Mt, of which more than 90% were manufactured by the catalytic dehydrogenation of ethylbenzene.

1. Preparation of Benzene Styrene flame resistant material composition.
The structure of the flame-retardant Benzene Styrene material make-up is as complies with: by worsening 5.5 to 12 parts by mass (B) consisting of 2,4,6-tris Brominated fire resistant of (2,4,6-tribromophenoxy)-1,3,5-triazine, 0.5 ~ 5 components by mass (C) flame resistant aid, as well as 0.5 ~ 1.6 components by mass (D) lubricant, and also the (D) lube is two or more selected from the team consisting of (a) polyolefin wax, (b) greater fat amide, as well as (c) greater metal carboxylic acid salt.
Amongst them, the corresponding proportions of (D) lubes are: (a) 0 to 40% by mass, (b) 0 to 80% by mass, and also (c) 0 to 80% by mass, (a), (b) The total amount of as well as (c) is 100% by mass. Making use of a material structure that is exceptional in item stamina (screw helping to loosen torque after assembly and also detachment), and also has an excellent equilibrium of formability (fluidness, mold launch, and also scratch resistance) and also warm resistance (deflection temperature under lots) The advantages contribute to the progress of thinning printer toner cartridge containers used as inner parts of printers, faxes, and also copiers, and their industrial utility worth is very high.

2. Preparation of benzaldehyde, styrene oxide and also styrene cyclic carbonate.
Oxygen oxidation of Benzene Styrene generates mainly styrene oxide as well as benzaldehyde, both of which are extensively used as intermediates in the synthesis of great chemicals. Amongst them, because of the visibility of active epoxy teams, styrene oxide can react with numerous materials to develop high value-added substances, which are utilized in the fields of scent production as well as medicine preparation, such as the prep work of scent β-phenylethanol and also simidazole; benzaldehyde It can be used to synthesize artificial additive such as L-phenylalanine. Recently, with the sharp boost in demand for such fine chemical products, the oxidation of Benzene Styrene as well as benzaldehyde has actually attracted much attention despite in terms of commercial production or organic synthesis.

The technique consists of the adhering to actions: A) mixing Benzene Styrene, a solvent as well as a stimulant, and adding an oxidizing agent to accomplish an oxidation response to get a response feed fluid and also a mixed gas, the response feed fluid includes benzaldehyde as well as styrene oxide, as well as the mixed gas includes formaldehyde; B) dividing the response feed liquid so regarding obtain benzaldehyde and styrene oxide; C) performing catalytic oxidation therapy on the blended gas so as to convert formaldehyde right into carbon dioxide and water; and also D) making all the carbon dioxide including The blended gas is reacted with a part of styrene oxide to create Benzene Styrene cyclic carbonate.

Prepared from ethylbenzene or Benzene Styrene [1]. Install a 24cm fractionation column on a 500ml flask, place 148 grams of dry cinnamic acid, 2 grams of hydroquinone and several clay tablets in the flask, and then put 0.5 grams of hydroquinone in the flask collecting the distillate . Heat until Benzene Styrene begins to distill, then adjust the temperature to 120°C in the fractionating column, after 3.5-5h, separate the distillate into layers, add 100ml of water, and then distill the water-containing mixture. Then separate the oil (45-48g), dry a small amount of calcium chloride, and distill under reduced pressure. During the distillation, the condenser and the receiver should be cooled to 0-5°C with ice water, and the distillate at 44-46°C/5332Pa should be collected. Parts, get product 40-42g. 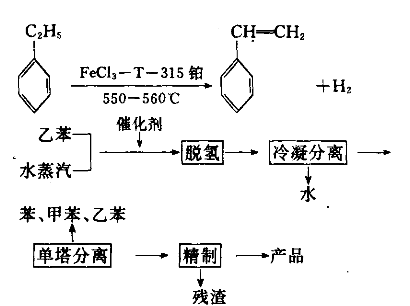 Method 2: Use waste polystyrene and styrene tar to make Benzene Styrene. It is realized by distilling and rectifying the raw materials (styrene tar or waste polystyrene plastic) after pyrolysis to obtain styrene monomer. The process is described below: 1) Cracking: put waste polyethylene plastic or Benzene Styrene tar into the cracking kettle, ignite and heat up, so that the temperature in the kettle is controlled between 320 and 400°C, and crude styrene monomer can be produced ;

2) Distillation: Put the crude Benzene Styrene monomer obtained above into the distillation kettle, control the temperature within the range of 80-110°C, and control the vacuum degree within the range of 550-650mmHg, and then distill to obtain Benzene with a content of more than 70%. Styrene monomer. The styrene monomer can be directly used in the production of styrene modified resin and other industries. 3) Rectification: The product after distillation is rectified by a rectification tower, and the fraction at 145-147°C is cut off to obtain a product with a content of more than 99%.

About Products:
If you need Benzene Styrene, a cosmetic raw material, please contact our service staff directly, and we will provide you with high-quality products at the best price.
As an experienced manufacturer and supplier of Benzene Styrene, our company, ZSpharmac will provide Benzene Styrene raw materials to customers all over the world for a long time.
Over the years, the company has been adhering to the spirit of “integrity management, strict quality control, customer first”, and has won unanimous praise from domestic and foreign customers.