What is Baloxavir Dose?

Baloxavirmarboxil is a third-generation anti-influenza chemical drug. The original company is Shionogi Pharmaceutical of Japan, and it is developed globally by Roche and it; The first new anti-influenza drug with an innovative mechanism of action approved by the US FDA is a first-in-class, single-dose oral drug with a new anti-influenza mechanism of action, designed to combat influenza A and B viruses, including Tamiflu Tasvir) resistant influenza strains and avian influenza strains (H7N9, H5N1). Studies have shown that the new drug can be effective in a single oral dose when used to treat acute influenza patients over 12 years old and whose flu symptoms last less than 48 hours.

In October 2019, Genentech, a subsidiary of Roche, announced that the FDA approved the expanded indication application for its new anti-influenza drug Xofluza (baloxavirmarboxil). Xofluza will be used to treat people 12 years of age and older at high risk for complications from the flu. These acute influenza patients have been infected for less than 48 hours without complications. Baloxavir is a “first-in-class” single-dose oral drug. It works against oseltamivir-resistant strains and avian influenza strains (H7N9, H5N1). The approval of this expanded indication is based on positive results from the Phase III CAPSTONE-2 trial. The CAPSTONE-2 trial was designed to evaluate the efficacy and safety of Xofluza compared with oseltamivir or placebo in patients over 12 years of age at high risk for influenza complications. Trial results showed that Xofluza significantly delayed the median time to onset of flu symptoms (102 hours vs 73 hours) in patients at high risk for flu complications. Other key findings included: Xofluza had similar efficacy (54 hours vs. 54 hours) compared to oseltamivir on the duration of flu symptoms; for type B virus, Xofluza was effective in a shorter period of time compared to placebo. Improved flu symptoms over time (75 hours vs 101 hours). In addition, Xofluza demonstrated good tolerability and safety. 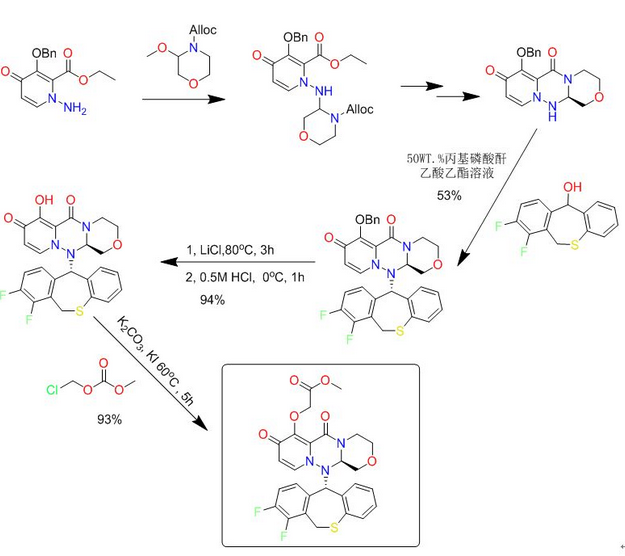 Help China Chemicals to benefit the happiness of human life

Become the most trusted chemical supplier in the world

Be prepared for danger in times of peace, forge ahead actively, unity and cooperation, and be brave to fight